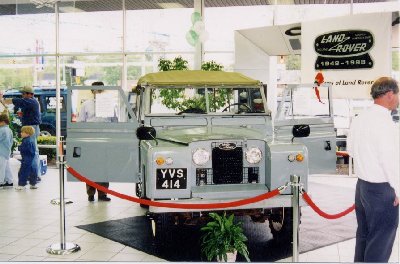 Peter bought this lovely 1963, Series IIA from us back in 1997. The above picture was taken when his local Land Rover dealership had it on display in the showroom during their 50 year celebrations (click on the image for an even bigger picture).

Pictures below show the Land Rover at our premises prior to converting to LHD, and the other two are ones that Peter sent us with the following message:

“Hi Mark, well here’s the snaps of “YVS” in the USA as promised. Drove her down to Washington last week so that we could get some recognisable backgrounds in the shot for you. The shot of her with the White House in the background is as close as one could get, and stop the car long enough to get a photo’.”

All the photographs on this page are displayed with the kind permission of Peter Mullett. The full size version of the thumbnails below are large files (approx. 200k), but well worth viewing, as they are some of the best we have seen. 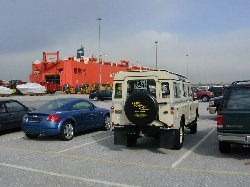 February 2001 update – Peter has just taken delivery of this magnificent 1965 109 5 door station wagon. It has been a long time coming (12 months – sorry Peter), but one of the nicest we have ever built.

Below are photographs taken at a recent Car show

BACK to Friends of the Land Rover Centre