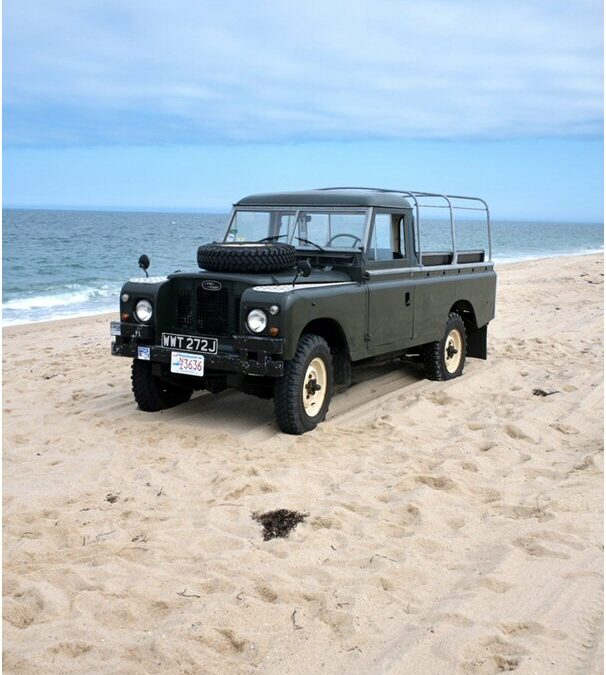 As I have often said on our news items, what a pleasure it is to hear from owners of our Land Rovers from years gone by.

Last week, it was a real surprise to receive a message and some pictures from Ken in Delaware, USA

We sold it to Greg, who was working in the UK at the time, and we eventually shipped it back to the US for him when he returned home.

Now after some 24 years, it has found its way to Nantucket Island, and is owned by Ken.

Ken was inquiring if we had any information or pictures from when we restored the Land Rover.

This particular Land Rover WWT 272J has an interesting back story, as it is one of about 20 we purchased at or around the same time.

Back then, the UK MOD were disposing of all their Marshall Field Ambulances.

We purchased as many low mileage Left Hand Drive examples as we could, with the idea of removing the ambulance bodies, and replacing them with standard 109 bodies – either hard top, soft top or pick up depending on customers requirements

In due course, the ambulance body was removed, and replaced with a standard body and full soft top.

The pictures in the gallery show WWT 272J as she is today and we really do thank Ken for these fantastic pictures and his kind comments:

“I wanted to share a few pictures of my 1970 Series IIA 109 that is living on Nantucket Island MA. You guys originally sent it over to the States for another buyer back in 1997. Still in excellent shape. It’s a head turner here on the island !”

Other pictures show part of the refurbishment process, and some of the other Land Rovers from the same batch.